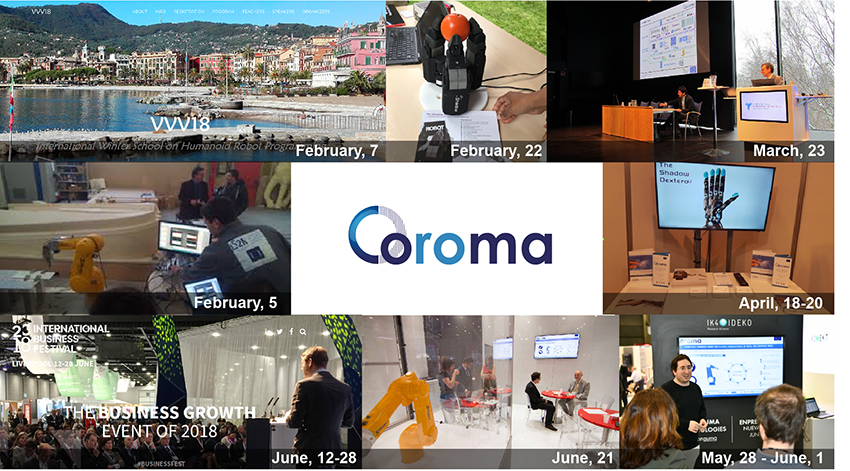 In the last months COROMA project partners have also been disseminating the project to different audiences in several events and conferences. In this way researchers, engineers, students and robot enthusiasts from all over the world, among other publics, have been listening the speakers learning about the innovations and technologies offered by current Robotics.

February was full of events. On February 7, in the VVV18 International Winter School of Humanoid Robot Programming in Italy, Rich Walker gave the students an overview of the state-of-the-art on the broad field of robotics and taught them the required, practical, skills that allow them to program robots taking advantage of available tools and libraries for perception, control and machine learning.

He, along with Penny Scully, also took part in the 2nd IEE UK & Ireland RAS Conference in London on February 22. There, they tried to improve the communication of its members and other researchers, young students and industrial professionals who were interested in different activities of RAS, mainly in research, but also in development and education, knowledge sharing, latest research achievements and technologies, exploring the future trends of RAS, and promoting collaboration and knowledge transformation.
Also in London, on February 27, an event took place about artificial intelligence and robotics and its innovation, funding and policy priorities. Interesting topics were discussed, such as where the Al and robotics technologies have been set to make greatest impact in terms of revenue generation, cost saving and efficiency and service provision, and where it has been done in the most successful way. In addition, they have been talking about concerns of the implications for employment, cyber security and safety, of the increasing use of robots and AI, and also the promise of greater productivity and skills.

The Industry 4.0 summit took place in two different times, both in Manchester. In the first one, from February 28 to March 1, where several Government and industry leaders gave keynotes addressing the implementation of robotics applications, personalised supply chains and technology-driven. The implementation of Industry 4.0 projects were also shown, and the summit closed with a wide ranging debate on the broader impact of Industry 4.0 on manufacturing and the wider economy. In the second summit, on May 30, the aim was to engage university engineers in robotics. Radhika Gudipati took on this opportunity to talk about COROMA and other projects.

From April 18 to 20, in the third edition of the Global Robot Expo, which is the international exhibition on robotics, related technologies and innovation, the last advancements in Industry 4.0 were presented – Service Robotics, Artificial Intelligence, Smart Technologies, Drones & Aerospace, Educational Technologies, Healthcare Technologies and 3D Printing. There were conferences, demos and technical talks in three conference stages, with top international speakers from all over the world.

Next event in Hannover, from April 23 to 27, offered the possibility of discovering what is behind the latest global industry trends in forums, podium discussions, presentations and conventions. The best speakers shared their experiences and delivered invaluable insights.

Again in London, on May 14, in the UK Research & Innovation (UKRI) Launch Event, the seven research councils, Innovate UK, and Research England that combine the UKRI, were launched. There, Shadow Robot spoke with several senior UK people about what they are doing in Europe, particularly COROMA. An exclusive group of 400-500 guests, that included Government Ministers and chairs from each research council gathered to hear the short speeches, outlining the ambition for the UK to become the most innovative country in the world.

About the events in June, the first one took place in Bilbao, Spain, in the 30th edition of the International Machine Tool Fair BIEMH2018. During 5 days, IK4-IDEKO participated in this biennial fair with a 140m2 stand where the latest developments in advanced manufacturing technologies were showcased. Developments concerning robotics and process automation included significant advances in new systems that simplify how robot machining tasks are controlled, as well as impressive new developments in the world of collaborative robots. In this context COROMA project was explained to the visitors.

In Rotherham witnessed the RAIN hub Industry Engagement Event on June 5. RAIN is funded by EPSRC and brings together eight teams of robotic and nuclear engineering experts from different Universities and RACE (Robotics and Remote Applications in Challenging Environments). The RAIN initiative has been created to address key industry issues by developing the advanced robotics and artificial intelligence that will be essential for future nuclear operations. Their adoption will have the potential to completely transform the nuclear industry globally.

UK Research & Innovation (UKRI) People Festival, was another happening where there were talks about various IUK and EU projects, including COROMA, with key people from UKRI (IUK + 8 Research Councils). This time took place in Swindon on June 7.

The last event until now, has been the Automatica 2018 The Leading Exhibition for Smart Automation and Robotics, where IT-Robotics presented EyeT+ Inspect a new version of our sensor for 3D visual inspection and quality control.