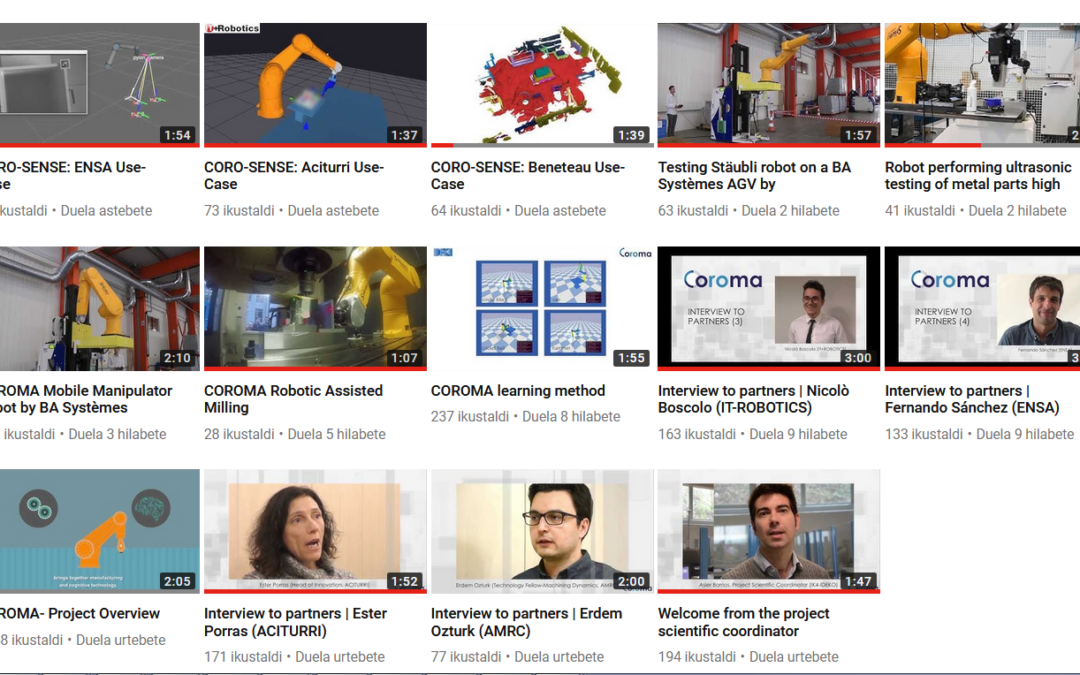 With the aim of making the robot become an autonomous system, some results have been obtained with COROSENSE, the module that recognizes the scene and the workpiece, COROHAND, which is able of dexterous grasp of multiple tools and objects, and COROMOB, responsible for mobility and navigation in semi structured environment. A selection of new videos has been upload to COROMA project Youtube channel about the different developments carried out in the scope of these 3 CORO-modules.

Robotic assited milling. The video shows the preliminary results of COROMA project partner University of Sheffield with robotic assisted milling. There can be seen the milling process without assistance and with robot assistance.
Testing Stäubli robot on a BA Systèmes AGV. Stäubli robot is assembled with its functional mobile base and robotic arm. The telescopic mast is reaching several meters above the ground to make the robot reach for highest spots in the working area. Currently driven manually by BAS’ main engineer on the project, it will soon be automated with the software technologies under development at COROMA.

Robot performing ultrasonic testing of metal parts. A robotic system of inspection of metal parts developed in the frame of COROMA Project which uses a robotic hand with the ability to handle multiple objects. The piece is from ENSA (Equipos Nucleares SA), the hand is from Shadow Robot Company, the robot is from Staubli, the team working on the ultrasonic technology and the setup shown is from IDEKO Research Centre. When applied to the inspection of large pieces, artificial intelligence allows the system to learn from previous similar inspections, predict the probable location of defects in the workpiece, and optimise the inspection path accordingly.

3 additional videos show COROSENSE module applications: 3D robot vision part localization and path adaptation with 3 end user cases. The first one shows the learning process of an industrial workshop environment. The robot understands its surroundings, recognises and maps the scene, and learns what a mould is by processing data. This work has been carried out between Università degli Studi di Padova and IT+Robotics with the end user BENETEAU. The second video shows part-scanning and localisation and trajectory planning with EyeT+ vision system in a workpiece of ACITURRI. In the last video, it can be seen a 3D rack weld reconstruction using 3D vision system based on laser triangulation technology, this one in the scope of ENSA use-case.